Buddhadeva Bose Memorial Award, presented to me by Sankha Ghosh, 2016 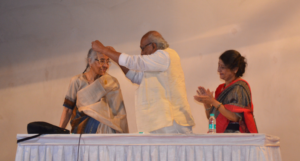 Best Bengali of the Year in Literature Award from Star Ananda, 2009

Translation Recommendation of the Poetry Book Society for the Selected Poems of Rabindranath Tagore, 1991

Grant from the Association of Senior members of St Hilda’s College, Oxford, for the Buddhadeva Bose project: 1999-2000

Fellowship at Salzburg Seminar Session 354, ‘The Contemporary Novel’, March 1998, with travel bursary from Southern Arts to attend the same

Translation bursary from the British Centre for Literary Translation, University of East Anglia (funded by the European Commission) to translate my play Raater Rode, October 1997

Writer-in-Residence to schools in East Anglia, grant from Eastern Arts, 1993

Study tour grant to visit German art galleries and museums, from the German Academic Exchange, 1992, for the project on Tagore’s use of colours in his art and literature

Visiting Professor, Visvabharati University, in connection with the translation project mentioned below, 1989, with travel grant from the British Council

Travel grant from the ICCR, New Delhi, to travel to Argentina, 1985

Research trip to Paris for work on Victoria Ocampo, 1984, sponsored by the Permanent Argentine Delegation to the UNESCO

Visiting Fellow, Visvabharati University, 1983, for working on the papers of Rabindranath Tagore and Victoria Ocampo, with travel grant from the Commonwealth Foundation