My background and philosophy 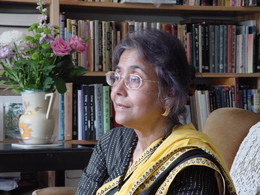 I think that a diversity of genres and a vigorous bi-culturalism and bilingualism are my hallmarks as a writer, and it is my aim to maintain this quality to the best of my ability. One does not get my true profile if one does not keep track of the many different things I do. I not only write and publish in two languages, Bengali and English, but also in several genres encompassing the creative and research-based modes. I have never severed my links with the literary life of my native Bengal and have been functioning as a writer of the Indian diaspora since the sixties, writing ‘transnationally’ and publishing extensively in Bengali magazines before I had anything out in book-form.

I am a writer of the Bengali diaspora who is claimed by the Indian-Bengali mainstream and is also read widely in Bangladesh and wherever there are diasporic Bengali-speaking communities in the world. Poetry, essays, and research-based books I write in both languages; I also translate happily between the two languages, in both directions. I belong to that small minority of poets who write original poetry in two languages, and I consider it a privilege of my life to be able to publish poetry in the little magazines of two distinct cultures, thus being in touch with the poetic pulse and ‘grassroots’ in each. Fiction and drama I have so far written only in Bengali, because these genres require the observation and incorporation of larger chunks of the social narrative, and this task is easier for me in Bengali, as my eyes retain a Bengali focus. So my fiction and drama may be set in England, but are written in Bengali.

In some of my books I have deliberately aimed at breaking down the barriers between the creative and the scholarly, which is one of my long-term aims as a writer. Thus my second novel has some important archival research and translation work embedded in it. Translations from the prose of Victoria Ocampo and from Ladino (Judeo-Spanish) songs are part of this novel. Interestingly also, all the research work I have done so far is strongly marked by either an interdisciplinary or an intercultural quality.

Being a bilingual and bi-cultural person, I am particularly interested in the processes of intercultural mediation. I believe that it is necessary to do a modicum of homework to understand another culture, so I think it is important to provide some information in the shape of an introduction and notes to a translated text. A list of my published books, chronologically arranged and inclusive of the two languages, is the best way to give an idea of my identity as an author.